The Challenge of Sustainable Fashion #609

The necessities of food, shelter, and clothing have all become a mix of what is needed and what is wanted as basics evolve into luxuries. What we wear, the places we inhabit, and even the food we eat are often designed to be aesthetically pleasing. We live in a world where scarcity and poverty are widespread, but poverty is not experienced by most people in most places. According to the U.S. Census Bureau: “The official poverty rate in 2021 was 11.6 percent, with 37.9 mil­lion people in poverty. Neither the rate nor the number in pov­erty was significantly different from 2020.” 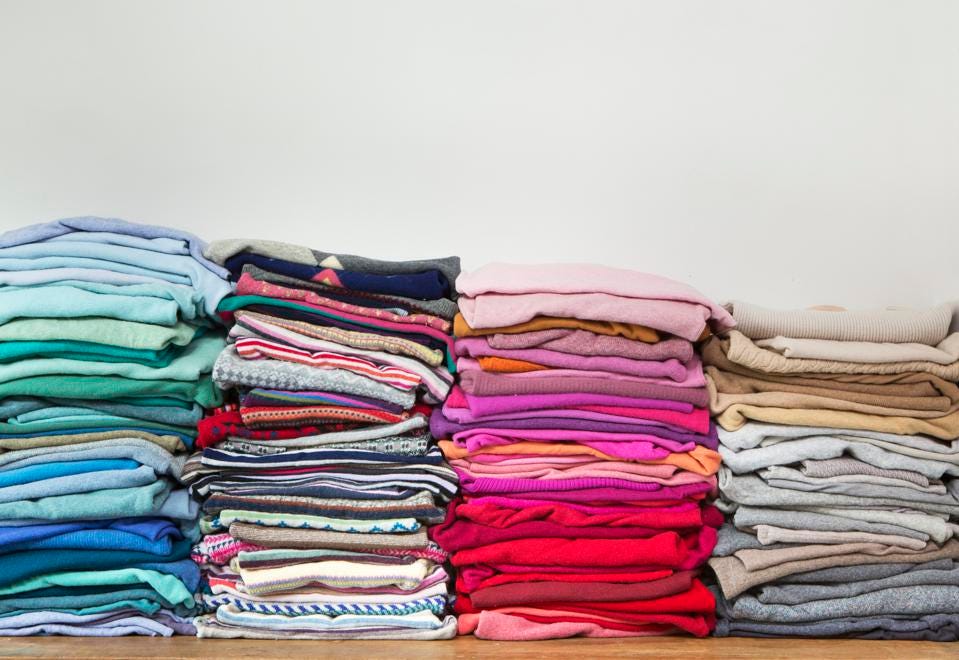 Globally, the World Bank sets the bar much lower than the U.S. and measures “extreme poverty.” They estimate that about 860 million people experience extreme poverty. A Brookings study finds about 250 million rich households worldwide and another 3.6 billion people in the middle class.

The environmental impact of wealthy and middle-class people includes the massive impact from culturally bound but increasingly destructive fashion practices. The move toward sustainable fashion must address several key questions: What do we wear? Why? How is clothing made? How much sits in our drawers and closets? What happens to clothing when we discard it? Even as we address these questions, many experts are deeply skeptical about the possibility of sustainable fashion. In a Harvard Business Review piece entitled “The Myth of Sustainable Fashion,” former Timberland chief operative officer Kenneth P. Pucker observes that:

“Few industries tout their sustainability credentials more forcefully than the fashion industry… New business models including recycling, resale, rental, reuse, and repair are sold as environmental life savers. The sad truth however is that all this experimentation and supposed “innovation” in the fashion industry over the past 25 years have failed to lessen its planetary impact…Take the production of shirts and shoes, which has more than doubled in the past quarter century — three quarters end up burned or buried in landfills…Thanks to trade liberalization, globalization, and enduring cost pressures, very few brands own the assets of their upstream factories, and most companies outsource final production…Like all industries, fashion is nested in a broader system. It is a system premised on growth….Combine the imperative of growth with accelerating product drops, long lead times, and global supply chains, and the result is inevitable overproduction…predicting demand across tens of styles that are launched seasonally is much easier than doing the same for thousands of styles released monthly…Five years ago, McKinsey reported that shorter production lead times enabled by technology and revised business systems enabled brands to “introduce new lines more frequently. Zara offers 24 new clothing collections each year; H&M offers 12 to 16 and refreshes them weekly.” This acceleration and proliferation of “newness” served as a constant draw to bring consumers back to sites and stores.”

This business model is enabled by technology and the absence of effective regulation of global supply chains. But it is made profitable by a culture of demand for changing fashion and “newness.” The demand for new looks is accelerated by social media and visual apps like TikTok and Instagram. Clothing is not worn for practical purposes, such as warmth and public modesty, but as a form of personal expression. This element of expression is not going to disappear. Pucker’s point is that the private sector alone will be unable to increase the utilization of sustainable materials and the development of sustainable business models. Falling back on the old economist solution, he proposes that we price negative externalities. According to Pucker: “After a quarter century of experimentation with the voluntary, market-based win-win approach to fashion sustainability, it is time to shift.”

If he thinks voluntary change doesn’t work, wait until he tries enforced change. Pricing externalities is an elegant economic theory that works well until it smacks up against political reality. For the most part, it is not politically feasible to price externalities. People do not like paying taxes for the things they want, and pricing externalities have equity impacts because poor people pay the same prices as rich people. The best way to use money to change behavior is not to charge more for destructive behavior but to subsidize constructive behavior. The culture of newness will be difficult to upend. It is reinforced by business imperatives in design, finance, and social media.

But it’s also the case that there is a growing understanding of the nature of the problem, and young people, who are the primary market for fast fashion, are beginning to understand the environmental damage caused by fast fashion. Dieter Holger, in a recent Wall Street Journal piece, wrote that:

“Fashion companies are planning to buy more recycled fibers as part of a wider trend of businesses using their spending power to foster innovative, low-carbon suppliers. Owners of fashion brands H&M, Zara, Gucci and Stella McCartney were among companies that said Monday they would collectively buy 550,000 metric tons of alternative fibers to make textiles and packaging, such as those made from agricultural residues or recycled materials. The planned purchase represents only a small portion of their total output and no deadline was set, largely because the materials are currently in scarce supply…Like many sectors, the fashion industry is coming under increased scrutiny from consumers and regulators about where its fabrics come from and the waste it produces. In the U.S., textile waste going to landfills has been rising since 1960 and reached 11.3 million tons in 2018, according to the latest figures from the U.S. Environmental Protection Agency. The fashion sector is also bracing for regulations from the European Union, whose executive arm published a plan in March that said clothing should be “long-lived and recyclable, to a great extent made of recycled fibers” by 2030.”

None of this contradicts the points made by Kenneth Pucker since these efforts are largely small-scale and symbolic. Another issue not discussed in either of these articles is the oppressive labor practices common in this industry. In a recent opinion piece in the New York Times, Rachel Greenley, a graduate student studying and working in the fast fashion industry, reported that:

“Of the 75 million garment workers worldwide, it’s estimated that less than 2 percent make a living wage, according to 2017 data compiled by one advocacy group. When we buy fast fashion from the comfort of our couches, we support a system in which low-wage workers (most of them people of color) make the clothes at one end of the world, and other low-wage workers (many of them also people of color) process the returns, unseen in the concrete suburbs of American cities.”

I assume that with further economic development and over time, many of these manufacturing jobs will be lost to automation. Nevertheless, today’s fashion industry must be characterized as oppressive and polluting. It also must be seen as culturally significant. Its ties to our culture are built on its deep connection to contemporary art, cultural taste, and design. The people who design clothing are creating beauty and expressing their own aesthetics, and enabling their customers to do the same. While I personally don’t participate in this world, I admire some of the people who do. The business model of contemporary fashion is less than admirable because it creates pressure for constant growth. The challenge of sustainable fashion is how to make that growth less destructive and less oppressive.

Here in New York City, back in the mid-20th century, before the fashion industry went big time and mass-scale, 500,000 workers used to make nearly all of America’s clothing. Clothing was still a necessity rather than the luxury item it is for many today. Today, we only manufacture samples in New York, but about 100,000 people design, market, and manage the fashion business in New York. It is part of the culture, arts, information, finance, education, health, wellness, and media economy that keeps New York City financially whole. Moving toward sustainable materials, renewable energy, and business models promoting ecological well-being and fair labor practices will not be easy or simple. But frankly, the fashion industry is no different than others now engaged in the generation-long transition we are beginning throughout the developed world: to move toward an environmentally sustainable world economy. Like earlier transitions from agriculture and trade to manufacturing and from mass manufacturing to today’s automated manufacturing and service economy, the transition to sustainability is not always apparent in its early stages. The sustainability transition is underway, but no one should underestimate the complexity and difficulty of the challenges ahead.