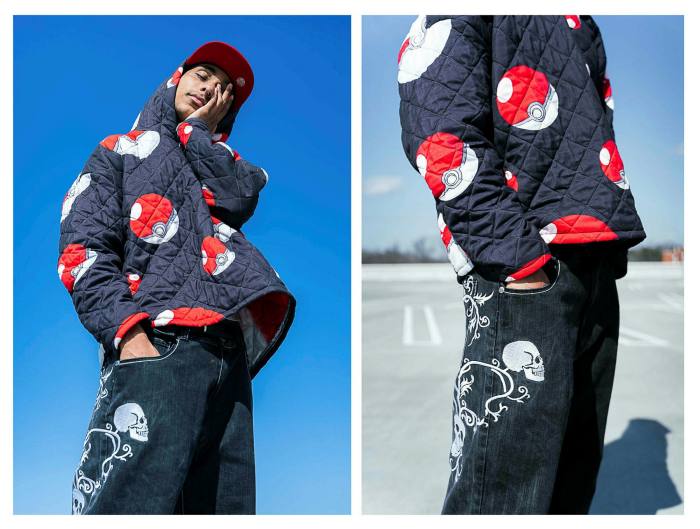 Andrew Burgess (@wandythemaker) has never taken a course on fashion or sustainability. But through TikTok, he’s helping shape how his generation thinks about both. In these videos, he shows the process of upcycling secondhand materials into new clothes. He’s amassed 279k followers since he started posting on the app less than a year ago. The self-taught designer and sewer is one of a cohort of Gen Z content creators who are making fashion that has a minimal impact on the environment look cool. Just don’t expect them to talk about “sustainability” much. “I’m not gonna say I’m the biggest environmental activist,” Burgess says. “But I think it’s cool taking textiles and giving them new life, because there are so many unused textiles out there already.”

Tierra Ruggebert is a 17-year-old whose page gained rapid popularity on TikTok when she began posting thrift flips via the handle @teaairaa. Though she learned to sew mostly from YouTube, she thinks the 15-minute tutorials posted there lose many people her age by being too long and “kind of boring”. TikTok’s super-short clips don’t have that problem.

On TikTok, which features short video clips that max out at one minute and restrict character limits, only highly visual content performs — which means users are more likely to learn how to sew pants or get the most out of their charity shop visit than about the granular details of supply chain ethics. But even if these TikTokers aren’t talking about the environmental impact of their clothing all the time, they’re still helping popularise lower-impact wardrobes. Twenty-five-year-old Emma Rogue, aka @emma.rogue, uses her account to give her 338k followers tips about how to find clothing at thrift shops and resell it. She first got on the app to promote her secondhand business on the marketplace app Depop, and her account shows people how to tell whether a pair of jeans will fit without trying them on, how best to package orders and how to repair gently worn clothes.

“I love fashion first and foremost. The fact that I’m also being environmentally conscious by selling these secondhand pieces and reducing emissions — that’s totally an added benefit,” she says. “And I’m way more aware of the sustainability aspect now than when I first started.” Rogue admits that more didactic content doesn’t always perform well. After she received comments questioning the environmental impact of the mailers she uses to send packages, Rogue made a video breaking down the difference between compostable, recyclable and recycled mailers. Despite her followers expressing a clear interest in the information beforehand, the video got far less engagement than her usual posts. “It didn’t do well at all,” she says. “Nobody wanted to hear the real facts.” Summer Dean, a 23-year-old who posts as @climatediva to 16.4k followers, understands that predicament well. Dean pursued environmental studies in college after witnessing the horrifying impacts of the Deepwater Horizon oil spill first-hand as a middle schooler on the coast of Florida. Having spent much of her college career researching renewable energy policy, Dean has been eager to use social media to help her peers learn more about climate change and the environment — and considering she’s also a model, she has the kind of look that makes success on a highly visual platform more likely. But Dean has run into the same issues Rogue faces. Though Dean’s first highly successful video was about the issues with fast fashion, she’s been frustrated to see videos that lean toward the informative fall flat.

“The challenge is that the form of the video is so short, and you really only have one or two seconds to keep someone’s attention,” she says. “It can be hard to convey nuance.”

Though Dean first started to get online traction via TikTok, she’s also quite active on Instagram, which she claims has a larger and more developed “ethical fashion” community. Whether that’s because the platform has been around longer or because of the way that Instagram allows for lengthier informative content, it means she sees TikTok as more of a jumping-off point that can inspire people to go elsewhere to learn more.

Sure, people might have to leave the platform to go deep in their knowledge about how their clothing is connected to the environment. But without TikTok, they might not have become curious about that in the first place, she reasons. That, combined with all the creators who are making thrifting and upcycling aspirational, has rendered the app a vital place for shaping how Gen Z thinks about the impact of their wardrobes.