A hotline has just been set up in the United States to support young consumers in their efforts to stop buying disposable fashion, considered as extremely polluting and harmful for the environment. The initiative comes from second-hand retailer ThredUp in collaboration with “Stranger Things” star Priah Ferguson. 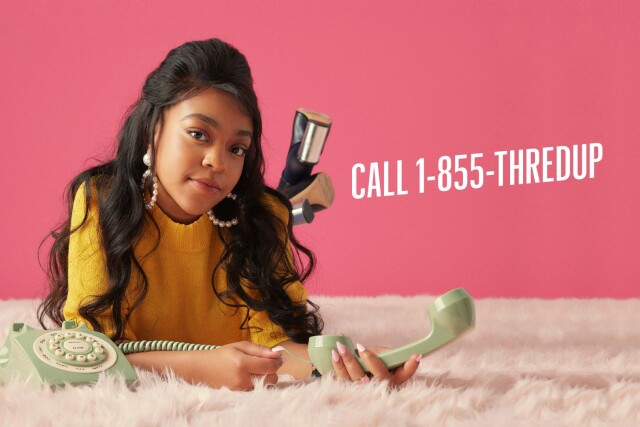 The second-hand platform ThredUp has gone all out by teaming up with young American actress Priah Ferguson, known for her role in the hit Netflix series “Stranger Things,” to raise awareness among teenagers about the harms of fast fashion. This initiative follows the publication of a report on the buying habits of American Gen Zers, which revealed an unhealthy relationship with disposable clothing for many of them.

Conducted in collaboration with GlobalData, the survey indicated that one out of three Generation Z shoppers describes themselves as a fast fashion addict. A finding that some people may find disturbing and/or surprising, but which above all demonstrates the need for this age group to access new trends at a lower cost, despite a deep concern for the environment. Indeed members of Gen Z are well aware of the environmental impact of fast fashion. More than one out of two young people interviewed (51%) say they want to stop or reduce their purchases of fast fashion, justifying this position by the desire to turn to more sustainable and ethical fashion. But the lure of attractive prices — even ridiculous prices — seems stronger, since almost half of the respondents consider it difficult to resist such ephemeral fashions.

As a result, ThredUp is tackling the issue head on with the launch of its “Fast Fashion Confessional Hotline.”  The second-hand platform has called on American actress Priah Ferguson to encourage the younger generation, through messages distributed through hotline which can be reached via 1-855-THREDUP, to “break up with fast fashion for good” and “embrace more sustainable shopping habits.”

It didn’t take long for the hotline number to make the rounds of social networks, promoted by the “Stranger Things” actress, but also through contests offered on various platforms, including Instagram. ‘Fast fashion addicts’ are even invited to leave confessional voice messages to recount their ‘fast fashion sins.’ Not content with listening to Priah Ferguson’s advice, consumers can also discover her selection of back-to-school clothes on ThredUp.

“I’m a huge fan of fashion and getting the latest trends, but I also care about keeping our planet healthy and strong. I’m very excited to partner with thredUP. After learning how bad fast fashion is for the environment, I decided to take a break from shopping that way. I hope this hotline inspires people to change their shopping habits and think about thrifting. Even small changes can make a big difference for our future,” the actress explains in a press release.