The Simpsons against fast fashion #290

Balenciaga surprised everyone at the beginning of October by collaborating with the satirical series The Simpsons for a “feel good” video featuring the fall-winter 2022 collection. One month later, the series seems to want to set the record straight, and shows the negative environmental and social consequences of the fashion industry, and of fast fashion in particular. 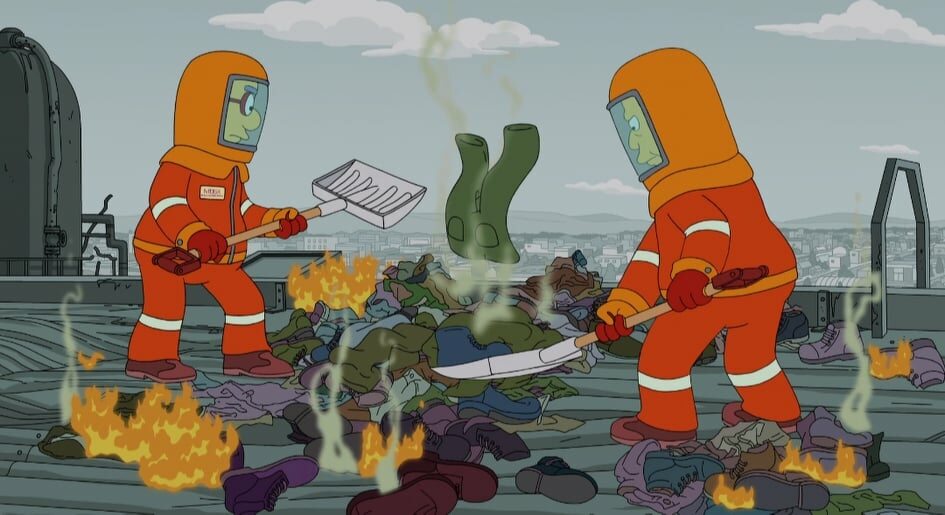 The eighth episode of the 33rd season, broadcast on November 21 in the United States, sees a renowned and talented designer settle in Springfield. But his factory will soon be described as as harmful as the neighboring nuclear power plant. Workers exposed to toxic products, a lake transformed into a giant tartan by chemical waste, a dumping ground for “last month’s” jeans in flames… The abuses are multiplying, under the injunction of silence made by the designer to his employees through posters akin to the propaganda of totalitarian states.

“Don’t worry, I have a great crisis management company: it’s the one that covered up the story that Peloton’s saddles are made of dolphin faces”, the designer reassures, adding: “If I make clothes for Tommy Target and Wendy Walmart, they have to be cheap. Because, in fast-fashion, the one who cuts costs the most wins!”

The episode reaches its climax when the textile factory is likened to Chernobyl. Orally, but also visually, the sequence maliciously reproducing sequences of the successful HBO series “Chernobyl”, broadcast in 2019, and more recently in France.

Although now often mentioned by the media, and at the heart of many documentaries, fashion CSR issues are rarely the focus of works of fiction. In 2019, Rubaiyat Hossain’s “Made in Bangladesh” was an exception, depicting the difficult journey of a textile worker struggling to create a union.

Another satirical series, South Park had also in 2018 heavily tackled overconsumption and its consequences, with a different angle. The ninth episode of its season 22, particularly targeted Amazon, whose workforce was caricatured as underpaid miners of the industrial revolution. The physical shops of fashion and cosmetics were depicted as disturbing abandoned ruins, where the idle salesmen had progressively turned into creatures inspired by Gollum of the Lord of the Rings.