Glitter is terrible for the environment. Is a greener version finally here? #219

Glitter is made of tiny plastic particles that damage the environment, and brands are on a quest to make it sustainable—but it’s a tougher job than it might seem. 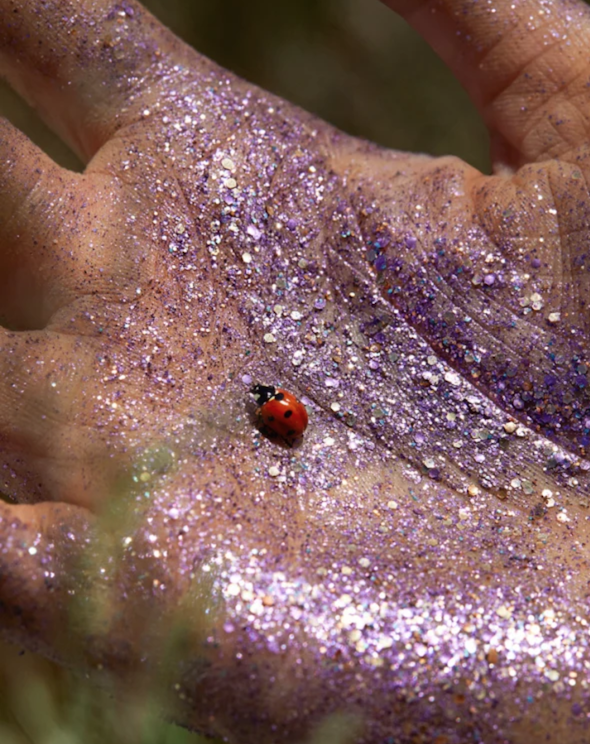 I have bad news: Glitter is hurting the planet.

That’s because the vast majority of glitter on the market contains minuscule, imperceptible particles of plastic. The plastic washes down the drain and enters our sewage system, where it doesn’t biodegrade. And a growing body of research suggests that these microplastics end up in rainwater, the food chain, and ultimately, the human body. While consumers are increasingly aware that plastic bottles and bags contribute to pollution, many don’t realize that glitter does as well.

Some glitter makers are on a quest to develop a version of the product that is more sustainable. And at least one has developed a glitter that completely biodegrades: A British manufacturer called Ronald Britton has created what it calls Bioglitter that is certified by TÜV Austria, the highest certification of biodegradability, to break down in natural environments in 28 days. And a U.S. makeup brand called TooD Beauty has formulated Bioglitter into a beauty product that is also entirely biodegradable. But while eliminating microplastics from glitter is an important step forward, because it removes a material that is potentially toxic to people and other organisms, other chemicals in eco-friendly glitters may still be damaging the environment.

The problem with microplastics

Plastic pollution is a global problem. Since the material does not naturally decompose, it ends up in landfills or oceans for centuries, where it will eventually break down into microplastics. Some consumers are now trying to cut down on their plastic use by using reusable bags and bottles and recycling as much as possible. But with products that are made with microplastics, like glitter and microbead face scrubs, there’s no way to prevent plastic particles from ending up in the environment.

The quest to create a biodegradable glitter

Many glitter brands have been working to create more eco-friendly alternatives to the products currently on the market. For instance, several brands including Bioglitz now make compostable glitter. But to decompose, this glitter needs perfect composting conditions, which includes optimizing temperature as well as oxygen and moisture content. “The problem with compostable products is it needs to be disposed of in a compost facility for it to break down,” says Shari Siadat, the founder of TooD Beauty, which launched this year. “This would mean scraping glitter from your face after you wear it and then sending it to a compost facility. That’s a totally unrealistic expectation for the consumer. Ultimately, it will end up down the drain where it will not biodegrade.”

These microplastics are known to pollute ecosystems, but scientists are only beginning to understand how they may be harmful to human health. Ironically, cosmetic companies first introduced plastic into their products because it seemed like a safer alternative to the harmful chemicals that were common in the industry. Leading microplastic expert Heather A. Leslie, a professor of environmental chemistry and toxicology at the Vrije University Amsterdam, says that for years, brands were using highly toxic chemicals in their products as solvents, including benzene, which is a carcinogen. Plastic polymers could achieve the same results without any known side effects.

But Leslie says we just don’t have enough information yet about how microplastics impact human health. She is among a group of scientists around the world currently conducting research about it. “Everything is toxic at some point—you can die drinking too much water or eating too much salt,” she says. “So what we need to do is find out how much we’re exposed to and compare that to the levels we know are safe. That’s what scientists are starting to do.”

In her initial research, Leslie has found that microplastics can cause inflammation in the body, which is concerning because chronic inflammation is the prelude to many diseases, including cancer. “The chances of plastic getting into your bloodstream increases the smaller the particle gets, and once that happens it can get deposited in tissue,” she says. “Then your immune system begins to attack them in different ways.” This causes an inflammatory response. But Leslie reiterates that we still don’t have enough information about exactly how much exposure to microplastics will triggers inflammation. “We just don’t know yet whether some of the diseases we’re seeing out there are cause by this plastic debris in our environment,” she says. “That’s what we want to find out right now.”

While Bioglitter does not contribute to the microplastic problem, it may not be completely harmless. A 2020 study published in the Journal of Hazardous Materials found that eco-friendly glitters made from cellulose had a negative impact on ecosystems in rivers and lakes. For instance, eco-friendly glitters lowered the amount of chlorophyll in the water, which would have a negative impact on organisms like microalgae, and reduced the root length of some plants.

Still Leslie, the microplastic expert, believes glitter manufacturers should continue to innovate and keep pushing to create products that are safe for both humans and ecosystems. “All brands in this space should be experimenting,” she says. “Of course, we need to critically evaluate these new products. But then we can scale up the ones that work.”