The (Re)Store space is part of an ambitious revamp that includes a 43,000-square-foot shoe department and a wealth of new services. 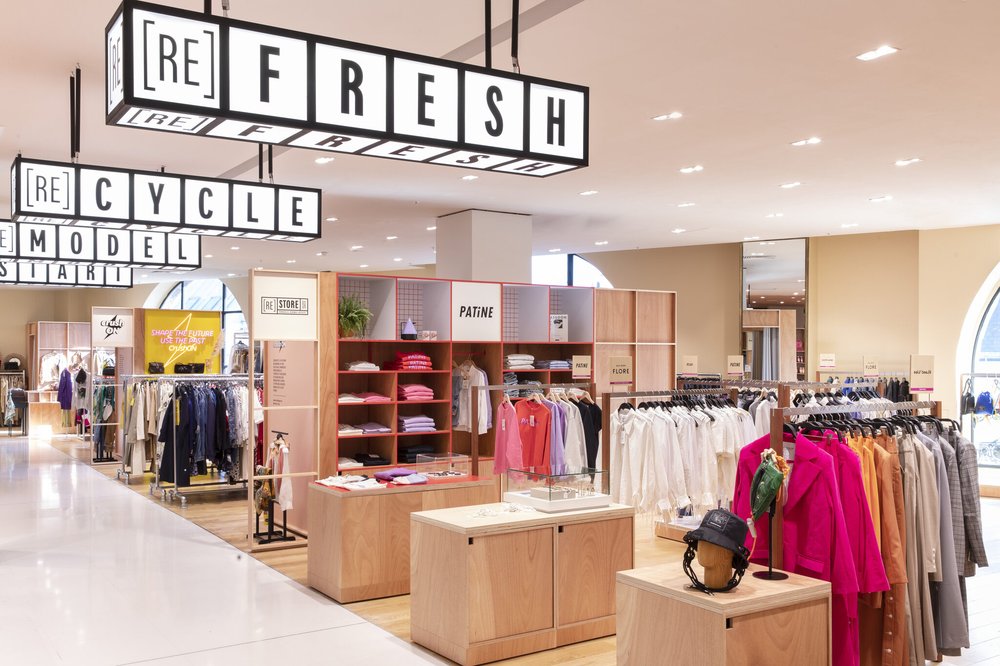 Galeries Lafayette today inaugurates (Re)Store, a new space dedicated to circular fashion, deepening its thrust into sustainability and the circular economy initiated with the launch of the Go for Good label three years ago. It comes as part of an ongoing rethink of the department store’s offering, initiated with the arrival of Marianne Romestain as buying and merchandising director for Galeries Lafayette and BHV Marais.

“After everything that was written about the end of the department store model, [the reopening after pandemic-related closures] showed that people were happy to see us again. So we’re pleased to kick off the year with a complete renewal of our offer and our spaces, for a reworked customer experience that has been designed to align with the trifecta of what clients want right now: products, services and pleasure,” Romestain told WWD in an interview ahead of the launch.

At the heart of this strategy was the overhaul of the store’s second, third and fourth floors, taking place within the wider framework of the ambitious “Projet Lumière” renovation project scheduled to run until 2024, which included the restoration of its famed century-old stained glass cupola, finalized earlier this year.

The trend-led second floor has been centered around the new multibrand concept La Créative Galerie, which will showcase a rotating selection of buzzy brands like Nanushka, Rejina Pyo or Denmark’s Stine Goya. Some 30 labels are featured in this space, ranging from mainstays Maje and Zadig & Voltaire to Proenza Schouler’s White Label line and French brands Dawei and Valentine Gauthier.

The third floor is home to labels Romestain described as “functional contemporary,” such as Joseph or Theory; a selection of digital native vertical “Instabrands” such as Navy Paris, Not Your Girl or Pretty Wire, all making their debut in physical retail, and the (Re)Store circular fashion space, which features 10 curated corners.

“It’s not just about having secondhand, it’s about offering different visions and approaches of pre-loved and secondhand,” she said, noting the selection goes from luxury leather goods to drugstore items for home and personal care.

The final space to bow this month is the newly renovated footwear department, which has moved from its former basement home to the store’s fourth floor.

Spanning some 43,000 square feet, it is the largest shoe department in Europe, and its 200-strong brand selection — ranging from sneakers by Axel Arigato to stilettos from Christian Louboutin — is the biggest in the world, according to Romestain.

Throughout these revamped spaces, services take pride of place. Take the footwear space, which now offers a sneaker refurbishment service by sustainable label Veja, open to any brand.

In the (Re)Store space, there are multiple ways to switch up styles, either by consigning items through one of the participating resellers, or by giving them to the department store’s collection corner, which will turn clothing, but also unwanted perfume bottles and makeup packaging, into Galeries Lafayette loyalty points.

“The overarching idea is that the store will increasingly become a space for services that go beyond what we sell ourselves,” said Alexandre Liot, director of Galeries Lafayette Paris Haussmann.

The rollout will be accompanied by a communication campaign developed by advertising agency DDB around the slogan “Le Grand Magasin de Tous” (or “The Department Store for Everyone”), playing on an earlier motto that was “Le Grand Magasin de Tout” (or “The Department Store for Everything”). It was shot by Swiss photographer Lei Wei Swee and filmmaker Jason Yan Francis, who has worked for brands like Dior men’s wear.

These changes come at a critical time for the department store, which has been buffeted by months of pandemic-related closures and the drop in foreign tourism, preceded by social unrest in France. Local competition just got a little more heated, with the reopening of luxury conglomerate LVMH Moët Hennessy Louis Vuitton’s La Samaritaine store.

Last month, Galeries Lafayette unveiled a plan to sell an additional 11 store to franchising partners as part of a strategy aimed at refocusing investments and efforts on the main flagships, omnichannel strategy and international expansion.